Birmingham City Council’s failure to act over a foul-smelling halal meat abattoir could be a result of a Trojan Horse-style reluctance to upset religious sensibilities, it has been claimed.
Despite being inundated with complaints over the stench of rotting flesh from the Mr Meats abattoir in Digbeth, authority investigators decided no action should be taken.
Complainants were instead told to contact the Food Standards Agency, which threatened the business with closure unless it cleaned up its act within a fortnight.

Now the council’s planning committee chairman, Coun Mike Sharpe, has demanded a full report into the case.
Committee member Coun Peter Douglas Osborn (Con, Weoley) took up the issue on behalf of firms in the area.
He said: “The issue seemed to fall between the city council and the FSA, it was very unsatisfactory.
“I am concerned there is a Trojan Horse aspect to this.”
The inquiries into claims of hardline Muslim takeovers at Trojan Horse schools found council officials were initially reluctant to investigate for fear of being branded racist or Islamophobic.
Coun Sharpe (Lab, Tyburn) said he would ask the council’s regulatory services, responsible for enforcing planning permission, to report back to him on the issue. 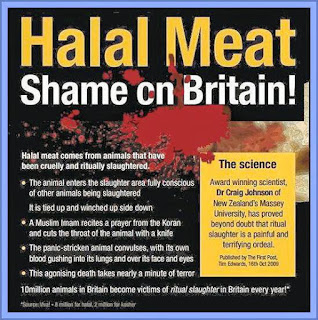 The FSA spokeswoman said in an earlier statement: “The Food Standards Agency has been made aware of a number of serious complaints in relation to this individual business and are investigating these as a matter of urgency.
“As a result of this, we are taking enforcement action to ensure the public is protected.
“We have issued a notice which means the business will have to stop slaughtering unless proof can be given that it is operating in line with regulations including the safe disposal of animal by products.”
Shah Ali, of the Moon Shisha Lounge, was among those who complained about the stench.
He said his staff and customers had been sickened by the smell.
Video also emerged of piles of animal waste in and around industrial bins at the premises.
No comment was available from Mr Meats.
Posted by English kaffir. at 1:43 PM