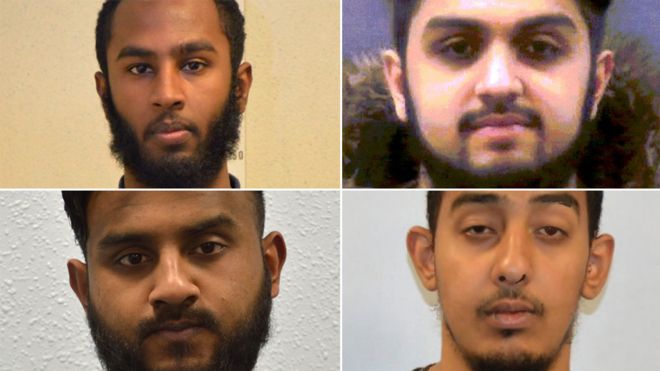 Eight men from London have been jailed for a phone scam that defrauded UK pensioners out of more than £1m.
Police say some of the money funded travel from the UK to Syria. There are fears some of those who travelled had links to so-called Islamic State.
Gang leader Makzhumi Abukar was jailed for seven years and four months, alongside accomplices including former X Factor contestant Nathan Fagan-Gayle.
Some of the victims - the oldest of whom was 94 - lost as much as £130,000.
Passing sentence at the Old Bailey, Judge Anuja Dhir said that none of the convicted men had shown any genuine remorse.
She told the men their crimes would have a "devastating and lasting impact" on the victims, whose average age was 83.
Phone scam victim: 'My fears my savings went to Syria'
She praised detectives from Scotland Yard's counter terrorism command who brought the men to justice.
Speaking about the victims, the judge added: "I was struck by their dignity and their courage when giving evidence about a matter that was so obviously painful for them to relive."

The sentences were:
They will all serve half their sentences before being eligible for release on licence.
Fagan-Gayle received £20,000 from the scam and went on a spending spree.

During the scam, carried out across southern England, gang members phoned elderly victims and pretended to be police officers.
They told victims about suspected fraud at their banks and instructed them to withdraw money or transfer it to different accounts for "safe keeping".
In some cases this involved handing over cash to "couriers" - gang members who arrived at victims' houses on the pretence they were working for the police.
Many victims were deceived into lying to their family, friends and banks about what they were doing.
World War Two veteran Kenneth Whitaker, who fought at the Battle of Arnhem, was 93 at the time of the fraud.
He said he felt "dumb and stupid" after losing £113,000 to the fraudsters.
Barbara Davidson, 86, lost £14,000 which she had been planning to use to visit relatives in South Africa.
She now fears she will never see those family members again.

The Metropolitan Police said about 140 frauds and attempted frauds were identified as part of the investigation - and more may have gone unreported by victims who were embarrassed by what had happened.
The force said officers found 16 telephone lines the group used to make 5,695 calls to 3,774 different numbers.
Commander Dean Haydon, head of the Met's counter-terrorism command, said he was pleased with the sentences given to the gang members.
He added: "They callously and systematically defrauded elderly people of their life savings.
"Had we not arrested them and put them before the courts, the group may have gone on to defraud many more victims across the UK."
Posted by English kaffir. at 9:08 PM