In at least one of the raids nearby residents reported hearing an explosion at 5.30am.
Last night four suspects were being quizzed over the alleged plot, which is thought to have been aimed at a major British city outside London.
Investigations appeared to involve a two-bedroom flat above the Mermaid fish and chip shop in Chesterfield, Derbyshire. 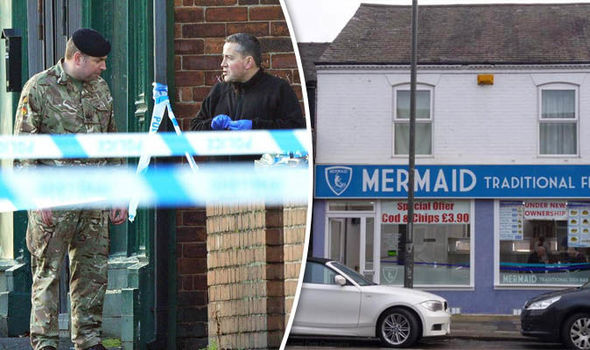 PA / BUSINESS LINK
Terror raids shocked Sheffield and Chesterfield yesterday
A man aged 31 was led out of the property in just boxer shorts while neighbours were evacuated to the nearby Proact Stadium, home of Chesterfield FC.
Meanwhile across the county border in South Yorkshire three other suspects aged 22, 36 and 41 were detained in Sheffield.
Police went in after MI5 intelligence indicated the gang were “getting close” to an outrage.
It followed IS threats to attack Christmas markets, with chilling images of a bloodied knife and a tied and bound Santa Claus.
Festive markets in Manchester, Leeds, Birmingham and Sheffield have all stepped up security.
Authorities face an unprecedented threat, with 500 investigations running at any one time and nine plots foiled since the Westminster atrocity in March.
An Army bomb squad was deployed to Chesterfield as police feared an explosive device might already have been assembled.
One of the raided properties was a house in the Meersbrook area of Sheffield, where locals said they heard an explosion.
Student Lizzie Fogarty, 27, said people went to and from the property “all the time” and she had thought it was a half-way house for refugees.
Police also searched a house in the city’s Burngreave area, a barber’s shop and adjacent flat in Stocksbridge and a former Irish club which is now used as a mosque and community centre.
One Burngreave resident said he was woken by three loud bangs and looked out to see six men with rifles in camouflage and full body armour.
Shortly afterwards another man was put into a police van.
Barber’s shop owner Mohammed Ojaky, 31, said officers told him they were looking for a man from Eastern Europe they thought was linked to the place.
Mr Ojaky, from Kurdistan, said: “There were 15 or 20 and many were armed. It was a big shock.
"I gave them details of all my staff but I did not know this man.”
Simon Fox, 22, who lives near another of the Sheffield properties, said: “We have seen Army, police, a couple of packages being removed by the bomb unit.
“You just don’t expect this to happen around here.”
Authorities believe that the gang’s intentions were focused “out of the capital” and were aimed at causing “mass devastation” in a main regional population centre.
An official spokesman said a bang heard by some residents was not an explosion but the sound of an entry being forced.
He added: “The arrests were intelligence-led and pre-planned.
“We recognise people may have concerns. We would ask them to remain alert but not alarmed.”

TERROR ARRESTS: WHAT WE KNOW SO FAR

The chip shop terror suspect - man held over Christmas bomb plot 'only became a devout Muslim a year ago' and his conversion 'happened overnight'
Posted by English kaffir. at 8:34 PM