Are we diverse enough yet? There is going to be a great deal more of this in shattered, staggering, dhimmi Britain, because the Qur’an teaches that Infidel women can be lawfully taken for sexual use (cf. its allowance for a man to take “captives of the right hand,” 4:3, 4:24, 23:1-6, 33:50, 70:30). The Qur’an says: “O Prophet, tell your wives and your daughters and the women of the believers to bring down over themselves of their outer garments. That is more suitable that they will be known and not be abused. And ever is Allah Forgiving and Merciful.” (33:59) The implication there is that if women do not cover themselves adequately with their outer garments, they may be abused, and that such abuse would be justified. 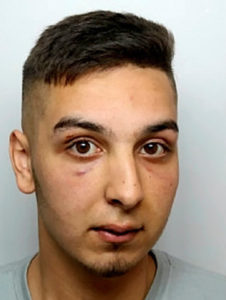 Two teenagers acted as a “twisted tag team”, raping a woman at her home, behind a mosque and in an alleyway at gunpoint in what police called a “disgusting, heartless attack”.

In March last year Aquib Ahmed and a 16-year-old who cannot be named for legal reasons broke into the Sheffield home of a man and his daughter, looking for drugs and threatening them with a handgun.
After realising they had targeted the ‘wrong’ house, as its occupants had no drugs or criminal connections and leaving,  South Yorkshire Police said the pair returned to the three days later “purely for their own sexual gratification, where they threatened the man and his daughter at gunpoint before they each raped the young woman repeatedly.”
Sheffield Crown Court heard how the young woman and her father were at home when there was a knock at one of the windows in the early hours of April 1 before Ahmed burst into the property.
Jason Pitter QC said the defendant, then aged 18, pointed a gun at the victim’s father, ordering him to go to his bedroom. After he complied, Ahmed held a gun to the woman’s forehead and raped her.
Judge Peter Kelson QC said: “After she was raped by you, you then, effectively, marched her to your co-defendant who was waiting behind the mosque.”

Breitbart London@BreitbartLondon
The jury was told a lost teen was “passed around like an entertainment device” by four Afghani-origin men. http://www.breitbart.com/london/2017/05/24/lost-girl-penetrated-every-single-orifice-alleged-gang-rape/ …

A jury heard the girl was "passed around like an entertainment device" by four Afghani-origin men after asking for directions at 555 Pizza in Ramsgate.
breitbart.com

Twitter Ads info and privacy
The Sheffield Star reports that Ahmed then left the scene, and his co-accused proceeded to rape the woman behind the mosque before taking her to an alleyway next to a nearby takeaway, where he raped her again.
“When he was finished with her, he told her to walk home … however her ordeal was not yet concluded, Ahmed was at her home waiting for her,” Mr Pitter told the court.
Ahmed then raped the woman again, and before leaving, told her: “Don’t tell the police, because if you do, we will be back to blow your heads off.”
Sheffield Crown Court heard the traumatic attack led to the victim suffering from anxiety and depression, quitting her job and moving house, in a victim impact statement where she explained the attack left her unable to trust men and ruined her relationship with her father.
“I don’t feel there’s a place for in this world anymore, I don’t feel there’s a place for me anywhere,” the young woman said, adding: “I feel like my whole life will be affected by this ordeal.
“I will try my hardest to move on, but I will never forget what those two monsters did to me.”

A Rwandan has been jailed for more than nine years for violently raping a woman after he became 'sexually aroused' in a Sunderland nightclub.
breitbart.com

Twitter Ads info and privacy
Sentencing Ahmed, Judge Kelson explained he treated cautions on the defendant’s record — which include sexual assault, and threats to kidnap and rape a young girl — as aggravating factors.
However, he sentenced the rapist to only 15 years, with another 5 years on license. He may not serve the full 15 years behind bars, either, as it is standard practice to release criminals from custody automatically halfway through their prison terms in most cases — meaning Ahmed could be free in seven years or less.
(This is what happened in the case of child groomer Mubarek Ali, who was sentenced to 14 years with a further eight years in licence, in theory, but released after only five.)
Ahmed’s unnamed co-rapist was sentenced to only six years, meaning who could potentially be released in three years or less, when he will not even be out of his teens.
The Sheffield Star applied to at least lift the reporting restrictions on the 16-year-old’s identity, given the seriousness of his crime and the potentially grave threat he could pose to the public, but Judge Kelson refused.
South Yorkshire Police seemed ecstatic with the sentences, however, announcing somewhat misleadingly that the teens had been sentenced to “over 25 years” — combined, inclusive of time which will not actually be spent in custody —  and crowing “What a result!”
When pressed, Detective Superintendent Una Jenning would not say whether she would appeal to the Attorney-General’s Office to appeal for longer terms under the Unduly Lenient Sentence scheme — it seems unlikely — although any member of the public who feels the sentences are inadequate can do so online.

UK: Criminals Could Avoid Court by Attending Rehab Under Plans to Tackle 'Racial Bias' in Justice...

Criminals could be allowed to sidestep charges if they agree to attend rehab, to reduce supposed "racial bias" in the criminal justice system.
breitbart.com

Twitter Ads info and privacy
New sentencing guidelines brought in last year instruct judges to treat young offenders from black and minority ethnic (BME) backgrounds more leniently than white criminals, urging courts to take into account “discrimination and negative experiences of authority” they might have suffered.
Having set up a Race Disparity Unit, the Tory government has promised to be “world-leading” in tackling disparities in outcome between white people and people from BME groups in the criminal justice system.


But figures recently revealed in the first detailed ethnic breakdown of youth violence suggests it has an uphill task in closing the gap, as they showed that 55 per cent of 260 suspects in fatal stabbings were black men, while just 11 per cent were white — despite the fact that black people are 3 per cent of the population, according to the 2011 census.
Posted by English kaffir. at 1:59 PM