Countryfile on Sunday night looked at the problems faced by the UK's sheep farmers and presenter Tom Heap asked why people have fallen out of love with lamb.
According to Government guidelines animals must be stunned before slaughter unless an animal is being religiously slaughtered for halal or kosher meat.
84 percent of Halal meat comes from animals which have been stunned before slaughter, according to the RSPCA.
Mr Heap said: “Right now there are two things keeping sheep farming afloat in the UK. One is the export market and the other you might not expect - Britain’s Muslim community.
“Muslims make up just five percent of our population but would you believe it they eat 20 percent of the lamb and mutton we produce.”
An Imam and his wife shared a lamb curry with Mr Heap during the programme.
Mr Heap said: “Like some other religions how the animal is killed is significant and for Muslims that means Halal slaughter in which a blessing is said before the animal dies.
“In Halal there is a debate over whether the animals should be conscious or not when killed. The vast majority in this country are stunned before death.” 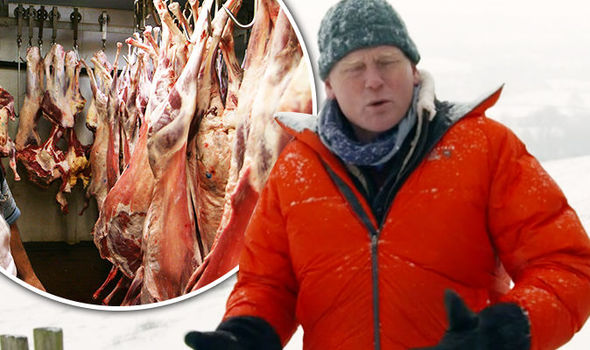 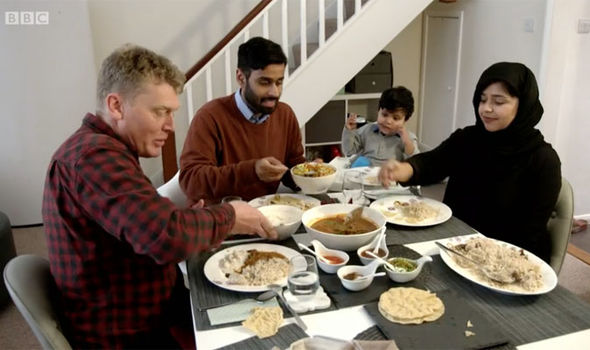 BBC
BBC Countryfile: Tom Heap discussed Halal meat with a Muslim family
Discussing the practice the Imam said: “There are certain practices where you want to fulfil a commandment of God and you’re basically invoking God’s name upon that. You are making the sacrifice in the name of God and now it’s made Halal. Halal means permissible and it’s been made permissible by God for you.”
But the segment sparked fury online. Social media users condemned the BBC on Twitter.
PattyBee said: “How dare you try and promote Halal on my tv in my home #bbc #countryfile.”
BrianYorks said: “Can you believe it #countryfile on BBC - propaganda for halal slaughter. How low can BBC sink.”
Stephi King said: “Halal means 'permissible' . Permissible to you. Ah, that's ok then . Religious barbarism inflicted on the vulnerable & voiceless that has God's seal of approval. Lovely. Just lovely #countryfile.”
Mark C said: “A NEW LOW FOR THE BBC. We have come to expect #brexit negativity from Countryfile - but the STATE broadcaster of a CHRISTIAN country attempting to JUSTIFY VILE #halal slaughter practices ON OUR SOIL...THAT is BEYOND despicable. Complaints to @Ofcom will follow.”
Andrew Booten said: “That was the most facile, irresponsible, one sided coverage of halal slaughter I’ve ever heard. #Countryfile.”
ProActive Patriots said: “The BBC were shamelessly promoting halal slaughter in last night’s Countryfile. They neglected to mention animals are left to bleed to death while still conscious.” 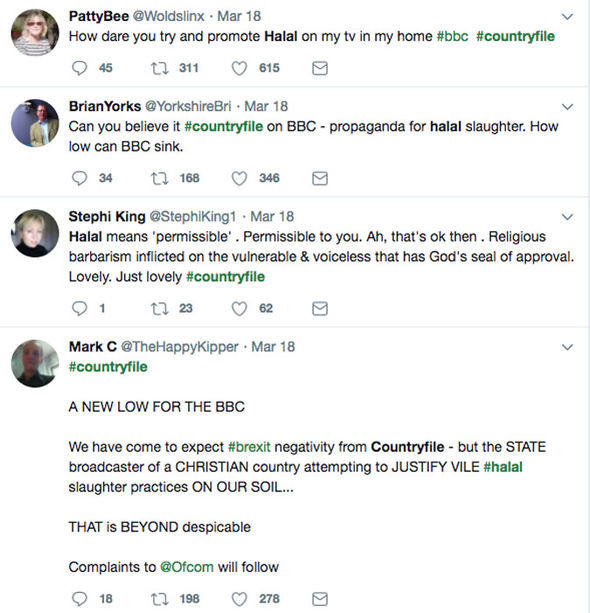 TWITTER
BBC Countryfile sparked a large response online
Other social media users commented on the segment blaming the price of lamb for the industry’s struggles.
Lyn Eaton said: “I love lamb but it’s too expensive #countryfile.”
@JaceUKMMA said: “People moaning about #halal on #countryfile You think killing animals in traditional ways and electrocution is any better? Idiots.”
Sally Griffin said: “You are wrong countryfile. people love lamb but it is expensive! #countryfile.”
Rosie Young said: British people LOVE lamb, LOWER the price and we'll buy loads! #countryfile.”
@K69atie said: “#countryfile You have missed the obvious point about the failing sales of lamb, COST. I love Lamb but haven't bought it for years,it's just too expensive.”
A BBC spokeswoman said: “Countryfile covers a range of rural issues and Sunday’s show examined the reduction in consumption of lamb in the UK and the factors keeping the sheep meat industry afloat.
“The question of what makes meat Halal was presented in a balanced and informative way.”
Posted by English kaffir. at 8:40 PM