It is clear from the names of the perpetrators, which the BBC deigns to supply, that they are all Muslims. But the BBC describes them only as “Oxford men,” as well as “seven men” and “the gang.” That’s it.
Now, the way journalism is supposed to work, the descriptor chosen for an individual or group is supposed to give the reader some clue as to the motivation behind the actions in the story. But did these men destroy these girls’ lives because they were “Oxford men”? No, they did it because they were Muslims, and their victims were non-Muslims. One survivor of a Muslim rape gang in the UK said that her rapists would quote Quran to her, and believed their actions justified by Islam. Sexual assault occurs in all cultures, but only in Islam does it have divine sanction. The Qur’an teaches that Infidel women can be lawfully taken for sexual use (cf. its allowance for a man to take “captives of the right hand,” 4:3, 4:24, 23:1-6, 33:50, 70:30). The Qur’an says: “O Prophet, tell your wives and your daughters and the women of the believers to bring down over themselves of their outer garments. That is more suitable that they will be known and not be abused. And ever is Allah Forgiving and Merciful.” (33:59) The implication there is that if women do not cover themselves adequately with their outer garments, they may be abused, and that such abuse would be justified.
But the BBC does not want people to know this, and gives no hint of it. The question for the BBC is why. Why is the BBC, and why are British authorities, so intent on protecting Islam and keeping people from realizing that these rape gangs are a phenomenon that arises because of Islamic texts and teachings?
“Oxford men guilty of sexual exploitation ‘on a massive scale,'” BBC, March 24, 2018:

Seven men have been found guilty of grooming and sexually abusing teenage girls “on a massive scale” in Oxford. 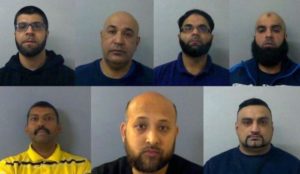 The gang was convicted of more than 20 offences including rape and indecent assault between 1998 and 2005.
Prosecutor Oliver Saxby QC said they carried out the “routine, cynical and predatory sexual exploitation” of vulnerable girls who were groomed with alcohol and drugs.
The five victims were aged between 13 and 15 when the offences started.
Opening the case at Oxford Crown Court, Mr Saxby said the gang preyed on girls who had a background of problems at home.
‘Almost unimaginable cruelty’
He said they offered their victims “company, attention, acceptance into the group” as well as “food, parties, alcohol, and sometimes drugs”.
Mr Saxby said this was all part of “the grooming process” the gang used in order to carry out “sexual exploitation on a massive scale”.
He said the girls would be made to have sex at parties, in cars or parks, with other men around, and sometimes after being subjected to threats and violence.
One girl was taken to a B&B in Iffley Road and told to have sex with older men, who one of the defendants described as “uncles”, he said.
Mr Saxby added: “She says she has lost count of the number of ‘uncles’ she had sex with… After sex she would sit in the shower and scrub herself.”
Verdicts

The UK has become a subjugated land, where Muslim rapists are tolerated and those who speak out against Islamization are banned and shunned by the establishment — including Robert Spencer.

Only one book actually exists in the UK on the Muslim rape gangs. To hear an interview with the author, click HERE.


In addition to the Muslim rape gang abuses against infidel girls, last year a UK Sharia court did the unthinkable: it handed down a sentence approving of honor killing.
Many Muslim women are sent back home by those same courts, to be further abused by their husbands.
More on this story. “Another Grooming Gang: Abuse on ‘Massive Scale’, Men Drugged and Raped Girls in ‘Sh*g Wagon’”, by Liam Deacon, Breitbart, March 26, 2018:
Posted by English kaffir. at 9:40 PM