“France Builds Trump-Style Wall to Stop Illegals Getting to Britain, 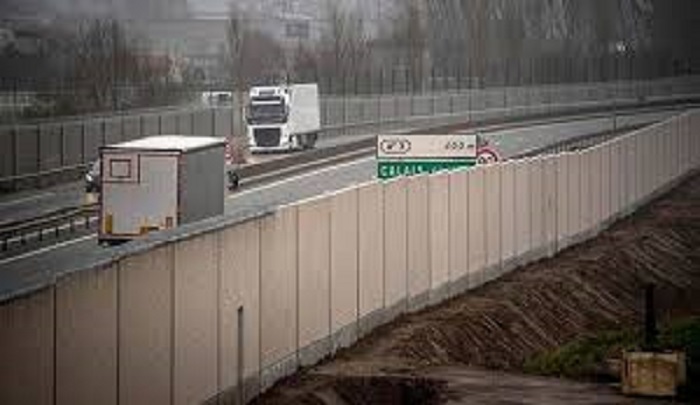 French authorities have built a ten-foot wall at a Total station in Calais used by migrants who attempt to storm lorries and break into Britain.
The barrier is being erected at a petrol station in the Marcel-Doret area where lorries stop to fill up with fuel before heading to the port and onwards to the United Kingdom. It is set to be finished by mid-February.
Local prefect Fabien Sudry told Nord Littoral that “smuggling networks meet there and take advantage of stations near the port to get migrants in trucks.”
“The situation was rather tense at this station. The police regularly had stones thrown at them,” Mr Sudry said.A Total spokesman confirmed the barrier was built at the request of the Calais prefecture to “protect customers, staff, and migrants,” the Daily Mail reports, with locals comparing it to the wall that U.S. President Donald Trump wants to build along the southern border of the United States to stop mass illegal migration from Central and South America.
Pro-migration aid workers object to the wall, as the barrier between the two spaces is “divisive.”One Calais-based charity worker who wished to withhold their identity complained: “The wall is ugly and of course divisive.”
“This is very political — it aims to show desperate people that they are not welcome here, and that more and more walls and police will be used to keep them out.
“If you oppose such policies, you can get into a lot of trouble.”
There are an estimated 600 mostly male migrants hailing from Afghanistan, Iran, and Syria squatting in makeshift camps around the port town waiting to break into Britain — down from an estimated 10,000 during the heyday of the infamous “Calais Jungle”.
It is believed to be the first time that a wall has been so quickly erected in a hotspot area for trafficking with the intention of stopping migrants attempting to make the journey to the United Kingdom…..