Sara Khan’s premise is that Muslims only turn to jihad because Infidels are unkind to them. If we turn in kindness to Muslims, all will be well. So if this unrepentant jihadi bride is let back into Britain, and raises more jihadis, all will be well, but if she is barred from the country, more Muslims in Britain will turn to jihad. Ultimately, resistance to jihad angers Muslims and thus creates more jihadis, so what Sara Khan is really counseling here is that Britain should simply surrender and adopt Sharia, and then all will be well.
“Stripping jihadi bride Shamima Begum of her British citizenship could spark extremist backlash against UK, warns Home Office advisor,” by Martin Robinson, Mailonline,
February 22, 2019:


Radical Islamists could exploit the decision to strip Shamima Begum of her British citizenship, the Government’s chief adviser on countering extremism has warned.
Home Secretary Sajid Javid made the move after the teenager, who fled London aged 15 to join the so-called Islamic State caliphate in Syria, said she wanted to return to the UK with her newborn son. 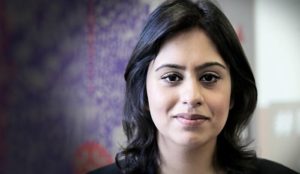 Independent adviser Sara Khan has cautioned that the Government must acknowledge the anxiety caused by the decision, with extremists being eager to ‘exploit alienation and grievance’.
‘While it is for courts to test the legality of decisions such as deprivation of citizenship, we have to also ask how measures such as this impact wider work on countering extremism,’ she said.
‘The Government has to recognise the unease felt by a wide range of people about decisions of this kind, not least those from minority communities with dual nationality.
‘It has to build trust in its approach, because Islamist extremists will exploit alienation and grievance to turn people against their country.’
The family of jihadi bride Shamima Begum have written to the Home Secretary challenging his decision to revoke her British citizenship.
Sajid Javid blocked the 19-year-old’s return earlier this week, saying she poses a risk to the country’s security.
But in a letter to Mr Javid, her family have said they ‘cannot simply abandon her’ and that her status is ‘a matter for our British courts’….