Gang guilty of passing girl, 12, around like ‘piece of meat’ for her to be raped

A jury has convicted four men from Telford who abused a vulnerable young girl after she was “passed around like a piece of meat”, sold for sex and raped.

The victim told how she was forced to perform sex acts in a churchyard, raped above a shop on a filthy mattress, and violently abused when she tried to refuse their advances.
In all, five men went on trial at Birmingham Crown Court.
The offences are alleged to have taken place in the Telford area of the West Midlands sometime between 2000 and 2003, and started when the girl, now an adult, was just 12.
The victim said she was assaulted by other as-yet unidentified males, with the abuse continuing until she was in her mid-teens, the jury heard.
Opening the trial, Michelle Heeley QC had said: “This case involves the sexual exploitation of a young girl, a girl passed around like a piece of meat for the sexual gratification of several young men, some of whom are in the dock.
Each of these defendants deny that they in any way abused anyone.
“The prosecution say, having heard the evidence, you can be sure they did.” 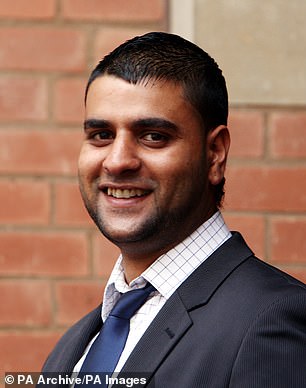 Jurors were told that the vulnerable victim was sold for sex, first by a man named Tanveer Ahmed, who had “befriended her” during a low point in her life.
Ahmed, who did takeaway deliveries at Perfect Pizza in the town, was not on trial alongside the other defendants, having been deported to Pakistan for “unrelated offences”, the court heard.
Jurors did not hear how Ahmed, then 40 and formerly of Urban Gardens, in Wellington, was jailed for two-and-a-half years after admitting a charge of controlling a child prostitute as part of a series of court cases that ended in 2013.
On Tuesday, Ali Sultan was unanimously convicted of rape and three counts of indecent assault
He was one of seven men jailed after an investigation into a child prostitution ring in Telford, as part of West Mercia Police’s Operation Chalice inquiry.
Later, the victim came into contact with the first defendant, Mohammed Ali Sultan, 33, formerly of Telford, whom she said also sold her for sex, raped and abused her.
The jury was told that he already had convictions in both 2012 and 2015 for “similar offences against young girls”.
Ali Sultan was also among the seven men originally convicted following the Chalice investigation into the abuse and prostitution of children in Telford
During the trial, jurors watched video-recorded interviews with the victim, in which she told detectives of enduring two years of “hell” and of repeatedly contemplating taking her own life as she was traded to different men for “months and months”.

She claimed to have been taken to a flat above the Perfect Pizza shop “to have sex with Asians”, and “lost count” of the number of men at whose hands she suffered abuse.
The woman said her family knew nothing at the time but added that “people at school” somehow found out, through rumour.
“I used to get called P-s***,” she said.
“There used to be like actions, with their hand, hand by their mouth, suggesting b*.”
She added: “Even the teachers heard people saying these things and not one teacher pulled me to the side and asked me if things were all right.
“I was too scared to go and ask for help. But nobody said a word.”
She told police that, years after the abuse ended, she recognised photos of Ali Sultan and Ahmed from press reports on the Telford sex ring.
Asked why she did not tell anyone about exactly what happened until years later, she replied: “I think I had just had enough, I kept it to myself for all these years.
Why should somebody be able to do those things and get away with it?
“Still to this day it goes through my head, all the time.”
As an adult, she later picked out each of the five men at police identification parades.
On Tuesday, Ali Sultan was unanimously convicted of rape and three counts of indecent assault.
During the trial, jurors were directed to find him not guilty of another rape charge after the defence presented evidence he was in Pakistan at the time the alleged offence took place.
Co-defendant Mohammad Rizwan, 37, of Mafeking Road, Telford, was also convicted of two counts of indecent assault.
Rizwan, who alleged he had a consensual sexual relationship with the victim when she was 17, saved the girl’s phone number under the contact name “blowjob2”, jurors heard.
On Wednesday, the jury also found co-accused Shafiq Younas, 35, of Regent Street, Wellington, near Telford, guilty of indecently assaulting the victim in a churchyard.
Amjad Hussain, 38, of Acacia Drive, Leegomery, Telford – unanimously convicted of a single count of indecent assault on Tuesday – was cleared by jurors, on Wednesday, of another similar offence.
Jurors also cleared Nazam Akhtar, 35, of Victoria Avenue, Wellington, of raping the girl in the back of a car.
The men will be sentenced on Thursday.