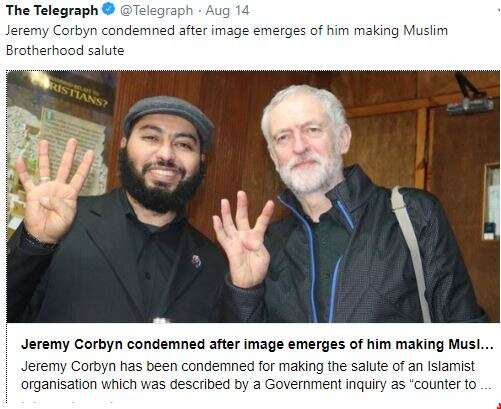 "a running sore" in the Labour Party that must be dealt with immediately.
The Labour Party's National Executive Committee drew criticism when it decided last month not to accept the international definition of anti-Semitism.
The committee chose to omit from its official deifinition accusing ‎Jewish citizens of being more loyal to Israel than ‎their own nations, claiming that Israel's existence ‎is a racist endeavor and comparing Israeli actions ‎with those of the Nazis.‎
The Guardian quoted one Labour MP as saying Corbyn would "just have to take one for the team" and deliver a "big speech saying, 'On my watch, no one who legitimately criticizes Israel will be punished.'"
Corbyn has been accused of failing to expel party members who express anti-Semitic views and has been criticized for past statements, including a 2010 speech in which he compared Israel's blockade of the Gaza Strip to Nazi Germany's sieges of Leningrad and Stalingrad during World War II and a 2013 speech comparing Israel's actions in the West Bank to the Nazi occupation of Europe.
The report follows the publication in The Telegraph of an image, apparently taken during a visit to a local mosque in February 2016, of Corbyn making a four-fingered Muslim Brotherhood salute.
Counterterrorism campaigner Maajid Nawaz tweeted that the Muslim Brotherhood is "bigoted, identitarian and dangerous," and that it should be "taboo for a left-wing politician to be associated with that group."
Establishing a state based on Islamic law (Shariah) is at the center of the Muslim Brotherhood's ideology, both in Egypt and among the group's many offshoots abroad.
According to a profile of the group by the Israel Project, the Muslim Brotherhood opposes secular tendencies in Islamic nations, rejects Western influences and values, and wants a return to Quran precepts. The organization's motto is: "Allah is our objective. The Prophet is our leader. Quran is our law. Jihad is our way. Dying in the way of Allah is our highest hope."
A Corbyn spokesman insisted the Labour leader was only "standing up for democracy" when he made the Muslim Brotherhood sign.
"Jeremy was standing up for democracy, justice and the right to protest in Egypt after the military had staged a coup against an elected president," the spokesman said.
The images of Corbyn making the Muslim Brotherhood sign come just days after Britain's Daily Mail published photographs of the Labour leader participating in a memorial service in Tunisia for Palestinian terrorists who murdered Israeli athletes at the 1972 Olympics.
On Twitter, British Foreign Secretary Jeremy Hunt asked, "If Jeremy Corbyn thinks terrorism is justified for the causes he believes in, how would he as prime minister have the moral authority to condemn terrorist murders of British citizens? Unbelievable and shocking."