Armed police have shot dead a suspected terrorist feared to be wearing a suicide vest after he grabbed a knife from a shop and stabbed a man and a woman during a brutal high-street rampage in south London.
The incident comes just three months after the London Bridge attack where Usman Khan was shot dead by armed police after he killed two people and injured three others while wearing a fake suicide vest.
Scotland Yard confirmed at least three people were injured in the attack and have been taken to hospital - with one in a life-threatening condition.
Officers raced to the scene outside a supermarket on High Road in Streatham at around 2pm  following reports of gunfire.
Photos from the scene show a lifeless body face down on the pavement with what have been described as 'silver canisters' strapped to his chest with a large knife is lying beside him.
In one video, police toting machine guns and masked undercover officers are seen approaching the suspect's body before rapidly moving away from the area.
Scotland Yard said the broad-daylight carnage was a terror-related incident around an hour after first reports from the scene. The area remains on emergency police shutdown.
A shop owner, who asked to remain anonymous, told Sky News that the man had taken a knife from a high street shop before the attack.
Witness David Chawner said: ‘I was going to the cinema. I saw what I thought was just a shop lifting.

I saw someone run down the street, bump into someone and then they fell to the ground, got up again, and then somebody shouted and then I heard what I thought was a car backfiring.
'I didn’t assume it was a gunshot until I saw what later turned out to be two officers pointing guns at an assailant on the road.' 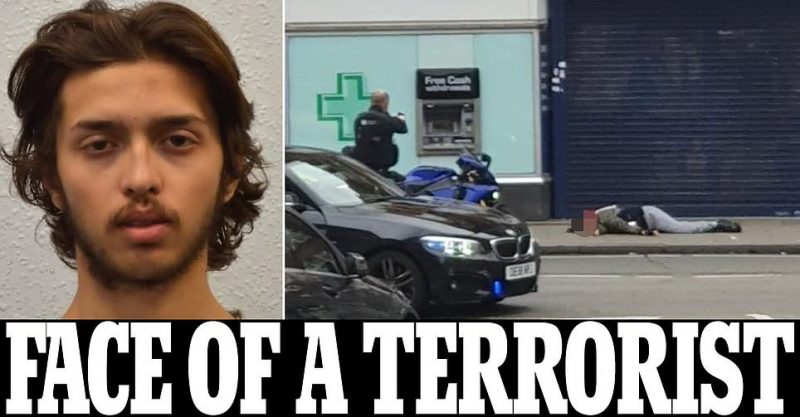 He added: 'And because I was going to the cinema I always carry a blanket with me.

It’s a stupid thing but I always get really cold in the cinema. So I took that out my bag and gave it to them to compress the wound.'
The Metropolitan Police tweeted: 'Three people are known to have been injured in the Streatham attack earlier this afternoon.

One person is at hospital in a life-threatening condition. We are in the process of informing their family.
'A second victim was treated for minor injuries at the scene before being taken to hospital.
'A third victim has been taken to hospital - their condition is not life-threatening.'
London Ambulance Service Strategic Commander Graham Norton said: 'We were called at 1.58pm today to reports of an incident in Streatham High Road.
'We are working closely with the other emergency services and are treating a number of patients at the scene.
'We will provide more details as soon as they are available.'

The man shot dead by police after wounding two people in a stabbing spree on a busy London street had been jailed for promoting violent Islamist material and had encouraged his girlfriend to behead her parents.
He had also once written a list of “goals in life” which included the desire to die as a martyr.
Police have named Sudesh Amman, 20, as the attacker.
He was killed on a street in the south London district of Streatham on Sunday afternoon by armed officers who had been carrying out surveillance on him.
In November 2018, Amman had pleaded guilty to 13 offences of possession of terrorist documents and disseminating terrorist publications and the following month he was sentenced to more than three years in prison.
He was released last month having served half the sentence.
A Whitehall source claimed he was released despite concerns because the law didn’t give them the power to keep him in jail.
The Whitehall source insisted that Amman had been under constant surveillance following his early release from prison just days ago.
Before being jailed in 2018, Amman asked his girlfriend to kill her parents because they were ‘kuffar’ and wrote about how his goal was to be a martyr.
His stash of manuals on bomb making, knife fighting and close combat included the titles Bloody Brazilian Knife Fighting and How to Make A Bomb In Your Kitchen.
Amman was 17 and living at home in Harrow, north London, with his mother and four younger siblings when he first began committing terrorism offences, according to authorities. Police became aware of his activities in April 2018 and he was arrested in a north London street a month later.
When officers examined his computers and phone, they found he had downloaded material about making explosives and carrying out terrorist attacks, court documents show.
Amongst the material found were documents titled “How to make a bomb in the kitchen of your mom” and “U.S. Army Knife Fighting Manual techniques” and “Bloody Brazilian Knife Fightin’ Techniques”. 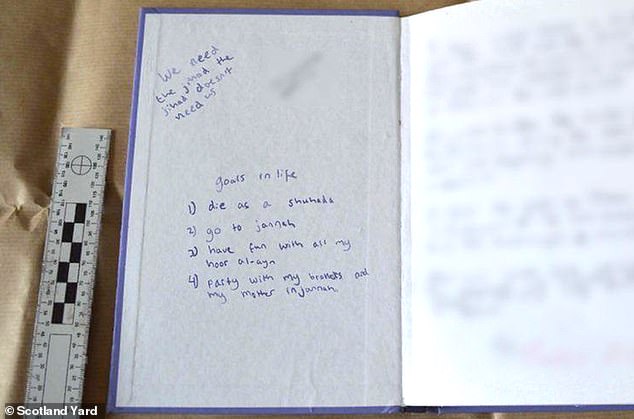 Sudesh Amman kept a notebook in which he wrote that his 'goals in life' were: 'Die as a shuhada', which means martyr, and 'go to jannah', which translates as paradise
Messages showed that he had discussed with his family, friends and girlfriend his extreme views and desire to carry out an attack, often focused on using a knife.
“In online chat you tell your girlfriend that you have declared a pledge to Islamic State and that you wish to purge society and carry out acid attacks,” Judge Mark Lucraft said when he sentenced him to prison.
“You speak about preferring a knife attack to the use of bombs and ask about having a knife delivered to her address.”
In December 2017 Amman posted a picture of Islamic State leader Abu Bakr al-Baghdadi, who was killed during a U.S. raid in Syria in October.
He also described Yazidi women as slaves and said the Koran made it permissible to rape them. In another message he encouraged his girlfriend to behead her parents….
Emergency laws blocking the early release of terrorists from prison will be brought in following yesterday's brutal attack in London, the government announced today.
Justice Secretary Robert Buckland announced plans for new legislation that would stop extremists from being freed from prison until they had served their full sentence unless they had been assessed and cleared by the Parole Board.
A No 10 source said the legislation would be introduced this week ahead of a package of measures expected later this year that could include a beefed-up role for the Parole Board.
Crucially ministers want plans for the law to apply to those already in prison for terror crimes, as well as those jailed in future.
Posted by English kaffir. at 6:53 PM