A reporter screamed live on air as she was attacked by a screwdriver-wielding man yelling 'Allahu Akbar' while covering the Black Lives Matter protest in London.
Nine News' Europe correspondent Sophie Walsh, 34, was assaulted while broadcasting at 9am this morning, according to the Australian network. 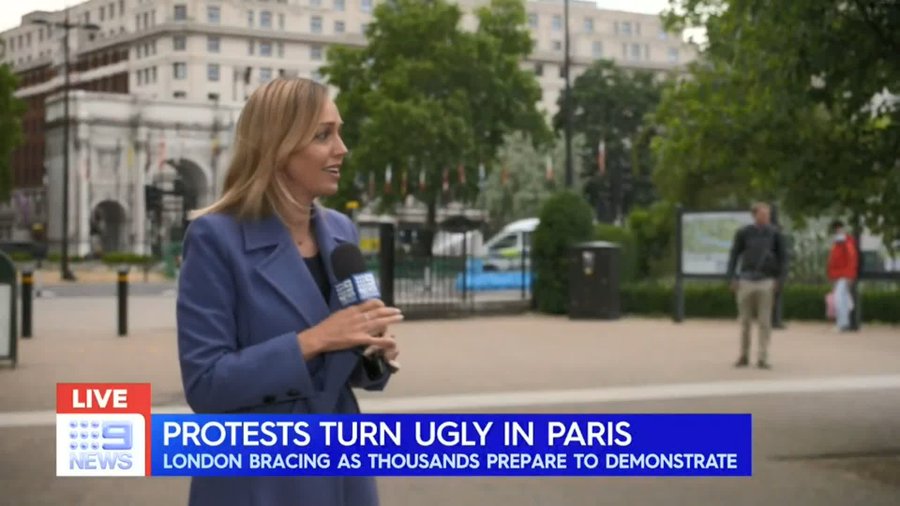 Footage was not captured of the attack but Ms Walsh can be heard screaming and seen clearly shaken afterwards while relaying the incident to one of her colleagues.
She said: 'Sorry, I just had someone come up and try and... yeah.
'A man just came up and grabbed me. He’s not armed. A man just came up and grabbed me though.'
A fellow presenter reported the attacker 'made motions to stab her' with the cameraman operator and bystanders chasing him down.
Footage later shows a man being detained by two police officers and held against a car bonnet.
The network said it is unclear whether the man 'had a screwdriver in his hand or in his pocket', reporting he was arrested for threats to kill and possessing an offensive weapon.
Ms Walsh later wrote on Twitter: 'Thank you for your messages. The man has been arrested for threats to kill and carrying a weapon. I’m shaken but okay.
'Big thanks to my incredible cameraman Jason Conduit who chased him down armed with a light stand and got him arrested.'
Senior producer Michelle Taverniti also posted a picture of Mr Conduit chasing after the man 'with a light stand', captioning: 'Incredibly brave. We’re all thankful they’re alright.'